The annual WAUC Rottnest Cray Comp was held on Saturday with 26 people making the weigh-in and Zoran’s boat, late. Matt was called away to work and Jack Moss had an incident with a fishhook which required attention.

This year the weigh-in was held at Porpoise Bay due to Thomsons Bay staging a 1600 metre swim thru. The committee after much consultation decided to keep the same date but change the presentation location. With no facilities everyone had to bring their own food and drinks. This was preferable to the hundreds of people expected at the Quokka Arms Hotel where we usually are for this event.

Thanks go to Graham Gould for organising the comp, Dave (Stabby) for putting bums in boats, Di for designing and printing the vouchers and all those who participated.

The conditions on the day were initially difficult with the wind 25 knots from the northeast early on and dropping to 10 knots come weigh-in. Visibility was very good and water temp a balmy 21-22 degrees C. There were plenty of crays but as you’d expect this early in the season, a lot with berries, setose or tarspot. Young Nick stoked to catch his first large cray. Jonty also did very well. Most people managed to get better than average size using the loop, some for the first time. Even Ray Hill who has been AWOL for a while put in an appearance.

The Club put up $700 in prizes with Ron from Hookah Dive in Wangara being a
generous sponsor. 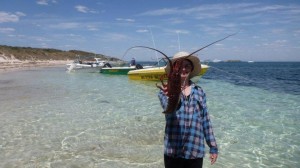